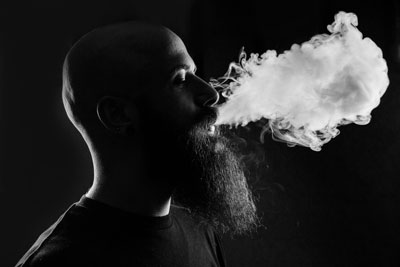 The beginning of a new year can bring with it much expectation, many promises and the potential for much change. If you resolved to make this the year that you finally quit the cigarettes and switch to e cigarettes, then a new video published by Public Health England (PHE) may provide you with the impetus to kick your cigarette habits into the distance once and for all.

Released in conjunction with PHE’s Health Harms Campaign, the experiment features Dr Rosemary Leonard and Dr Lion Shahab showing us the difference between smoking and vaping, with the concluding evidence providing truly harrowing viewing for those watching. By using two glass jars containing cotton wool buds designed to simulate what might happen to the inside of our bodies when we smoke and vape, the buds are subjected to the equivalent to that of a month’s worth of smoke and vapour per jar respectively.

The final contents of each jar are in complete contrast to one another, with the cotton wool buds exposed to smoke fairing visibly the worse for wear, stained with a thick, sticky, black and yellow tar produced by the carbon monoxide and the thousands of carcinogenic chemicals released every time you burn and smoke tobacco.

The glass jar containing cotton wool buds exposed to vapour released from an e cigarette are distinctly different to those subjected to tobacco smoke, with barely any discolouration and a dampened area localised to near the middle of the cotton wool buds the only resulting evidence from a month’s worth of vapour.

44% of Smokers Think Vaping is as Bad as Smoking

Did you know that vaping is up to 95% less harmful than smoking tobacco? Public Health England stated in 2015 that vaping even has the potential to help smokers become smoke-free. However, recent studies by anti-smoking campaigners ASH estimate that 44% of smokers still believe that vaping is as bad as smoking, which could perhaps be conceived as a crude misconception given the startling evidence presented to us by PHEs video.

Director of Health Improvement at PHE, Professor John Newton commented; “It would be tragic if thousands of smokers who could quit with the help of an e-cigarette are being put off due to false fears about safety. We need to reassure smokers that switching to an e-cigarette would be much less harmful than smoking. This demonstration highlights the devastating harms caused by every cigarette and helps people see that vaping is likely to pose only a fraction of the risk.”

Shamefully, smoking-related deaths accounted for 16% of all adults fatalities in England in 2017 – a figure that could potentially plunder should the estimated 44% of smokers realise the benefits that vaping might have on their lives. To encourage a wider spread of cessation among the population of six million plus smokers, it’s clear that more information regarding the potential health benefits of vaping has for smokers needs to reach the masses.

Dr Lion Shahab said; “The false belief that vaping is as harmful as smoking could be preventing thousands of smokers from switching to e-cigarettes to help them quit. I hope this illustrative experiment helps people see the huge damage caused by smoking that could be avoided by switching to an e-cigarette.”

Misconceptions and myths can be a tricky path to traverse for some, so help a smoking friends’ health and show them PHE’s video today to help them stop smoking, start vaping and together you can discover your favourite e-liquid flavours.