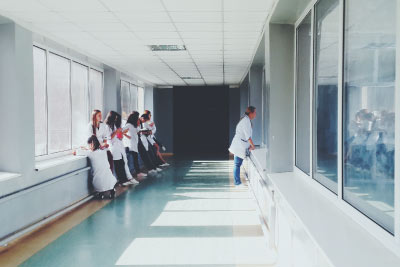 Following guidance and advice from the Government’s agenda for Tobacco Control, and the All-Party Parliamentary Group (APPG) for Vaping ’s assertions for more healthcare sites to consider designated vaping spaces, Chesterfield Royal Hospital has made the welcomed move to allow patients to vape on the hospital grounds. Let’s find out more, and delve further into this fascinating development…

It’s no secret that smoking and smoking-related deaths remain what seems like an unending burden on our healthcare systems. Attributable to 16% of all adult deaths in the UK, smoking on hospital grounds remains a key factor in the Government’s agenda for Tobacco Control and its aim to achieve certain objectives by the end of 2022. Part of a much larger scheme of initiatives that aim to tackle these objectives is providing patients admitted to hospital with smoking-related ailments, the support they need to become smoke-free and potentially enhance their health.

A win for vaping to be viewed as a viable cessation product to quit smoking, last month, Colchester Royal Hospital followed the pertinent advice of Public Health England and will now allow vaping on the hospital grounds.

The norm and natural inclination for the majority of hospital grounds around the country are to ban smoking on-site as a whole, which has been met with mixed success in the past. Because vaping is often viewed in the same way as cigarettes, the lack of facilities and designated spaces for vapers are a somewhat rare sight to encounter – but is this all about to change for the better?

Advocates for vaping providing a positive alternative for smokers, Public Health England published an independent report declaring e cigarettes to be up to 95% less harmful than tobacco products and that vaping even has the potential to help smokers become smoke-free. With this in mind, it makes sense that designated vaping spaces on hospital grounds and health sites should become synonymous with the Government’s ambitions to encourage a smoke-free generation.

By providing vaping spaces for smokers looking to become smoke-free or those already existing vapers admitted to the hospital, patients will be afforded an altogether more comfortable stay free from the nagging cravings that being addicted to nicotine brings.

The efforts of Chesterfield Royal Hospital to allow vaping on its premises, of course, follows in the footsteps of Ipswich and Colchester hospitals who in 2017, both replaced traditional smoking shelters with designated outdoor vaping areas. Allowing vaping on hospital grounds can liberate patients who might be in for the long haul, who naturally loathe having to make an extended excursion to the outer boundaries of the hospital for their fix of nicotine.

But will more hospitals follow suit and make the move to provide patients with designated vaping areas? With increased efforts by the likes of UKVIA and the APPGV to promote vaping as a viable cessation product for smokers to become smoke-free, it is hoped that eventually hospitals may even sell vaping products with pure e-liquids on site to help smoking patients make the important switch to vaping. Watch this space.