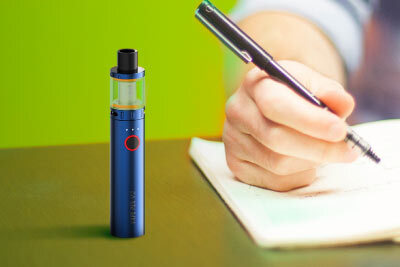 We have seen a rapid evolution of vaping in a short space of time. Vape pens have been around since a while now and continue to intrigue, proving useful for beginners in particular. Simple to use and predominantly available in a long cylinder shape, they closely resemble cigarettes in terms of dimensions. This is a big selling point for those looking to quit smoking and with brands like SMOK, they know how to produce a vape pen that provides the right platform to switch over to e-cigarettes. In recent times, we have seen the SMOK vape pen 22 kit, which proved an initial hit with vaper's of different levels, focusing mainly on Direct to Lung vaper's (DTL). However, it lacked a cutting edge because of a few design flaws. Many vaper's noted how there tended to be frequent leaks and there was no battery indicator. More recently SMOK has developed a similar vape pen with a similar look and feel, with the addition of a few features. Step forward the SMOK Vape Pen V2, let’s see what it's made of with an in-depth review.

If you’re new to the vaping game, the terminology can be puzzling. Even for some regular vaper's it can be sometimes misleading based on where you are from and what websites you read. That’s part of its charm as a cessation tool - not only does it help smokers to reduce their nicotine levels but it divides opinion too (in a good sense). Because you can get different battery sizes, coil strengths, e-liquid flavours and devices of varying sizes, the industry finds new ways to innovate each year. Vape pens, vape pods and vape mods all get their spot in the limelight, giving something different to the user. With vape pens and vape pods, they’re both typically preferred by beginners. There is not much contrast between the two, other than the size with vape pods more short and compact (more likely to fit in your pocket at least).

On the other side of the debate, you have vape mods. These are becoming more popular as the vaping industry develops and gathers more attention. Although vaping has been around since 2003 thanks to Chinese inventor Hon Lik, we have only seen the emergence of the vape pod evolution in the past decade. As vaper's enjoyed a greater level of control over their device, this created a gap in the market for a vape that could answer the community's thirst for personal technical ‘modifications’. And so we saw the vape mods, which are now really popular, producing much larger vapour clouds, more heat, higher wattage and longer battery life. This is ideal for DTL, which steers away from mouth to lung vaping (MTL) techniques which resonate more with smokers.

This brings us nicely to the upgraded SMOK Vape Pen V2, a fantastic little device that comfortably fits in your hand but deceives in its performance. You can expect huge clouds of vapour for its size, which is great for not just ‘cloud chasers’, but also those wanting to move up from MTL pods and pens. When you think of DTL devices, chunky box mods spring to mind because the devices need more power, which often requires dual batteries to support the increased wattage. However, with the SMOK Vape Pen V2, you still get 60W, which is more than enough for DTL with a built-in singular battery.

What’s great about the V2 which didn’t exist with the 22 is the adjustable airflow option. For such a small device weighing 94g to have this option, you can balance how restrictive you want the airflow to be with a compact device. Therefore, it provides ideal Sub-Ohm vaping in the palm of your hand. In terms of practicality, you will not find many like this device that’s so easy to use and not requiring any technical adjustments. If you prefer to not fiddle around with settings and different buttons, it’s the perfect set up for a transitional device, or a simple DTL carries around device for more advanced vaper's.

What’s in the Box? 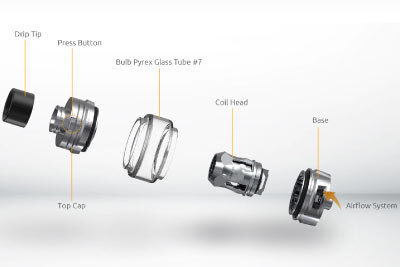 How to Assemble the Device

The beautiful thing about the SMOK Vape Pen V2 is the minimal amount of assembly needed to use the device. In your kit, you will get two mesh coils, which after a little bit of priming with your chosen e-liquid slot nicely into the base of the device, screwing clockwise. Then place on the pyrex glass and add the mouthpiece on top.

We all know what can happen when a product overheats or malfunctions. It’s one of the reasons for vaping on occasion getting bad publicity - like any electrical device which can overheat, such as an Apple phone charger. Battery explosions or e-liquid leaks can happen, but it’s good to know when you find a product that protects the user. With the V2 vape pen, you get:

You can find all the safety information you need not covered here in the user manual, which you should read carefully before using.

Is it Easy to Use?

A 60W device that produces huge clouds and looks stylish too? What’s not to like! One of the best aspects of the Vape Pen V2 is simplicity. Because there are just a fire button and no LED screen, which could upset some vaper's who want more information on the screen. For example, with a device that powerful, you should be able to adjust the wattage and voltage to get the optimised performance. However, for those who don’t want to mess about, the one-click-does-all device works well. 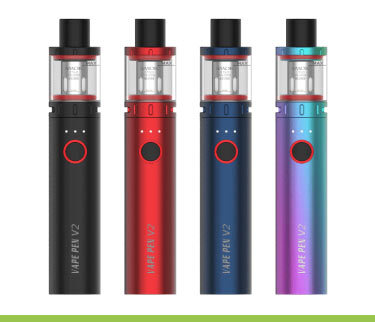 Standing at 117.7mm in height, it’s slightly bigger than the 22 kit from SMOK, which was 110mm. Aside from the length, the notable differences with the V2 pen are the LED battery indicator, which features above the fire button. Double click to check what’s remaining. If only the left indicator lights up, that means it’s at roughly 30% battery and needs charging. Because the mini USB cable port is towards the top of the device, you can do so standing it up which is useful. When two lights flash, the V2 is 70% charged and three lights indicate a full charge. It lasts roughly a day depending on how much you use the device, thanks to the 1600mAh battery.

How Does the V2 Vape Pen Perform?

You can get plenty out of your device because of the large battery size, especially considering its compact nature. The clouds it produces is very surprising, but the high-quality flavour is expected from a well-known brand like SMOK. In terms of style, which is just as important as performance, it stands out with its bold colour schemes such as blue, black and rainbow. The 0.15 OHM mesh coils enhance the taste with each vapour draw, which is easy enough because of the single fire button.

With a 22mm diameter, it’s wide enough to support a strong DTL draw. Topping up your e-liquid and priming your coils is easy with the classic design, which is highlighted in the diagram below. The only shame is it comes with a micro USB charger and not the Type-C, which is more common with modern devices.

Overall, the SMOK Vape Pen V2 is certainly an upgrade on the 22 in terms of design, functionality and wattage. Compact and stylish, it looks the part and is easy to carry around. This vape pen is ideal for a secondary device, especially if you do not want a large vape mod, but more of a discrete device which can fit in your bag or pocket for work and social gatherings.

For those looking to push on with their vaping journey and believe they’ve maximised their time MTL vaping pens or pods, the Vape Pen V2 is a nice set up to advance your skills, increase your flavour and cloud production. It’s easy to charge and use, with a user-friendly design, but might be not enough for those who want to alter and tweak their vape manually, as most DTL devices provide. At the end of the day, it comes down to personal preference and what you want from your device.