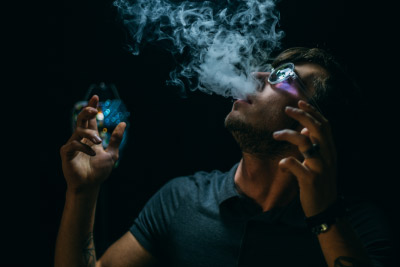 If you vape, you may well have come across Nicotine Salts. Far from the latest seasoning for your fish and chips, nicotine salts provide vapers with an alternative to the commonly found pharma-grade nicotine based e-liquid that we are all so familiar with. But what are nicotine salts and how can they help you vape less?

In managing to successfully ditch the cigarettes and make the sensible switch to vaping, you’ve already taken the first significant step towards leading a healthier lifestyle. Go you! Free of tobacco and the thousands of harmful carcinogens that are released into your body every time you smoke, the next logical step is to become free from the addiction of nicotine. Easier said than done.

Whether it’s a lack of ‘throat-hit’ or not receiving what you deem to be enough nicotine, a common complaint by vapers is, that for all their good intentions, e-cigarettes and conventional e-liquids simply don’t simulate smoking in a like-for-like way. In your endeavours to stay smoke-free, you may find that you actually vape more just to get what you need - hardly ideal if the ultimate ambition is to become nicotine and vape free. The evidence clearly shows that vaping is better than smoking. What better way to cut down all together?

What Are Nic Salts?

Nicotine salts are found naturally occurring in and on the leaves of the tobacco plant. For the purpose of e-liquid, the nic salts are combined with the food additive benzoic acid, flavourings, and a blend of PG/VG liquid to produce a final product that is generally considered to be the strongest e-liquid available on the market.

Where nicotine salts in their raw form have previously been considered to offer little in the way of bioavailability, it’s the addition of benzoic acid that improves the speed that the nicotine salts are absorbed into our bloodstream – even quicker than traditional freebase nicotine that we may typically consume in our standard e-liquids.

As well as increasing how quickly you’ll be affected by the nicotine, the benzoic acid also produces a satisfying ‘throat hit’ similar to that of smoking, but without the toxic burn of tobacco.

The majority of cigarettes, e-liquids, nicotine-gums, and patches use pharmaceutical grade strength nicotine. Often referred to as ‘freebase’ nicotine, this is the purest kind of nicotine you can get. The potency of this form of nicotine is achieved by stripping the natural nicotine salts of all its surrounding protons with ammonia, which additionally gives cigarettes the throat-hit that for some are almost addictive as nicotine itself. The higher the nicotine content – the stronger the throat-hit.

Reduce How Much You Vape With Nicotine Salts

Reducing how much you pick up your vape pen for a puff can play a pivotal role in you becoming nicotine free. Due to the chemistry involved with nicotine salts, the increased speed of the nicotine hitting your bloodstream will tend to leave vapers satisfied for longer. Staying satisfied for longer means less vaping, and less vaping means reducing the habit of picking up your vape pen in the first place. Why not try VSAVI’s Premium E-Liquid Nicotine Salts and find out for yourself?