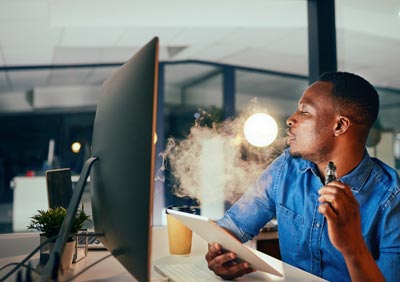 Successfully switched from smoking to vaping? Go you. Whether it was simply your time to stop, or you’ve embarked on a health kick to finally get fit, in your efforts to vape and remain smoke-free, the proposition of having to vape at work with smokers may not seem like the most appealing, nor logical thing to do. At least this is the case for the majority of vapers nationwide, as workplaces and public spaces fail to address the differentiation between vaping and smoking and place the two incongruently together.

If you’ve ever smoked at work, on your break or at lunch, you may well have been privy to a small and loyal group of smokers, who, unless you smoked, may have never even spoken with you in the first place. In fact, smoking is probably the only thing you ever had in common, as well of course how bad the office coffee is. For whatever reason, you and your smoking crew at work have become hooked. But when you decide to stop, you may not receive the support you might ‘expect’ from friends - ‘we’re a dying breed’ one smoker mutters with exclusive glee, masking their very own desires to disown their habits.

Sharing the same space to vape and smoke presents you, the vaper, with a list of problems that include, the second-hand smoke you may inhale from tobacco smoke, the temptation to smoke instead of vape, as well as the peer pressure and lack of support that you may need, on what can be a stressful journey to becoming smoke-free.

E-Cigarettes Are Not the Same as Smoking

For many, it seems that viewing e-cigarettes and tobacco cigarettes together is the easiest thing to do. It’s an unfortunate case that the replicated simulation e cigarettes and vaporizers provide is so visibly similar to tobacco smoke.

If you didn’t know, e cigarettes work by a battery powered atomiser heating a nicotine-based e-liquid to a vaporised state – no burning, no carbon monoxide, far less harmful. E-liquids are available in a number of nicotine strengths, which means that vapers can gradually reduce their nicotine intake over time and eventually become both smoke and nicotine free.

The reality is that Public Health England declared e cigarettes to be up to 95% less harmful than smoking tobacco and that they have the potential for smokers to become smoke-free. If it wasn’t abundantly obvious, the majority of those using e cigarettes are trying to actually stop smoking and lead healthier lifestyles.

E-cigarettes and vaping are exempt from smoke-free legislation, which means that the decision on whether your work will allow vaping will ultimately lie with your bosses. This November, an All Party Parliamentary Group for Vaping presented recommendations to the Houses of Parliaments to introduce an onsite vaping policy in Westminster to allow vapers their own spaces – separate to smokers - as well as potentially allowing vaping at their desks should circumstances allow. These recommendations were made by MP’s in the hope that further employers throughout the country would also follow suit and introduce a workplace vaping policy.

As well as recommending workplace and public space vaping policies to be implemented, the group of MP’s also advised that a vapers’ etiquette should be adhered to - common courtesies that include asking those near you if they mind you vaping.

Why not ask your bosses what their thoughts are if they are willing to implement a vaping policy? Let us know how you get on and whether you can help make a difference to your workplace.