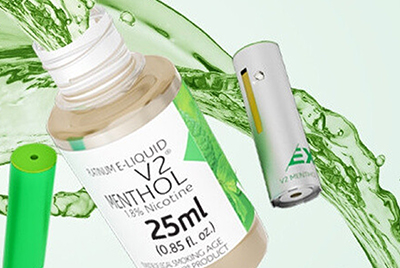 A popular alternative to conventional tobacco, menthol cigarettes are set to be banned outright throughout the UK & EU from 20th May 2020.

While many observers see this as a big step in the right direction, others are increasingly concerned about the potential risks involved and how smokers could be adversely affected. Estimates show that there are up to 1.5 million menthol smokers in the UK.

So, what is the history of the clampdown on menthol flavoured tobacco cigarettes and how can you protect yourself, your friends and family when the ban comes into effect?

The History of Menthol Cigarettes

First invented by the memorably named Lloyd “Spud” Hughes in the 1920s, menthols were a uniquely American product that were quickly marketed worldwide under the ‘Kools’ brand. They were produced in a near identical way to conventional cigarettes; adding the menthol element at various steps in the production process before consolidating the ‘flavour’ at the base of the cigarette.

Given the lack of medical or scientific information at the time, menthol cigarettes were overtly marketed as therapeutic products that had a soothing effect on the throat – all without the provision of any supporting evidence. In order to gain a foothold, the company eventually chose to segment its marketing. In the US, this was delivered along racial lines, with cultural institutions such as Ebony magazine ~ten times more likely to run advertisements for menthols, leading to legacy issues that are still being addressed to this day.

After gaining an initial foothold in the states, the brand quickly spread to the rest of the world – maintaining it’s targeted marketing practice and medicinal claims. This culminated in the global menthol cigarette industry being measured at $80bn US in 2018 and projected to expand at a CAGR of 3.1% between the 2019-2025 period.

However, recent shifts in the narrative around smoking have highlighted the potential harm that menthol cigarettes represent. Chief among these is the often-overlooked danger they can act as a gateway cigarette for young smokers or as a ‘half measure’ to counteract the risks of smoking.

Why Are Menthol Cigarettes Being Banned?

Brazil was the first country to explicitly ban the products in February 2012. This led to the confirmation of EU Directive 2014/14/40 by the European Parliament “to better protect consumers… by taking into account new scientific knowledge and legislating on new tobacco products”, explicitly calling for the ban of menthol tobacco products.

Despite an appeal from Philip Morris, the European Court of Justice (ECHO) upheld the ban, setting an enforcement date of May this year. When pressed to justify their reasoning, some of the key rationales included:

Research found that menthols actively countered the elements that may make a first-time user turn their nose up at smoking. This included hiding the unpleasant aroma tobacco, using the cooling effect of menthol to make smoking easier, and carrying a more positive brand image due to targeted marketing. This was judged to have had a disproportionately large effect in LGBTQ+ communities with brand marketing actively labelling them as an ‘alternative’ to conventional tobacco products.

Menthol Cigarettes Are a Cancer Risk

Despite marketing efforts, menthols are, in fact, tobacco cigarettes with additives and carry a high carcinogenic risk to users. The links between smoking and cancer are widely documented and menthols were judged to produce an elevated risk to users. In this way, the menthol ban is seen by many as an attempt to reduce the risk of cancer by preventing the sale of products with a ‘characterising flavour’.

Menthol Cigarettes Are a Danger to Youth

In addition to being a gateway product, the nature of menthol was believed to make the products seem attractive to children – with the product a common staple of the alternative scene and easy for new users to develop a tolerance to.

For the UK, the ban on menthol products has been part of an ongoing initiative that actually goes further than projected EU initiatives – with prohibition continuing even after Brexit. As Deborah Arnott of Action on Smoking and Health observes: "The regulations will be reviewed this year but given that the UK goes further than the EU requires on tobacco regulations, e.g. we ban all advertising, and point of sale displays, and require plain packaging, it is unlikely that leaving the EU will lead to a weakening of our tobacco regulations." In practice, this would mean that no vendors or persons will be able to supply or produce menthol cigarettes or hand rolled menthol products.

How Will the Menthol Ban Affect Smokers?

Despite the positive impact of removing carcinogenic products from our shelves, some observers have levied significant criticism against the move.

One of the major concerns for regular menthol smokers is the risk that removing the product poses. For many, this will require them to switch to another product, find a new brand, or try to give up smoking entirely. Many commentators believe that this carries the potential of relapse into harder tobacco products and introduces the risk of increased consumption. This was reinforced by a recent study from the National Centre for Biotechnology Information (NCBI) which discovered that 12% of UK smokers consume menthol as their key brand. This extrapolates to one in ten habitual smokers being affected in countries where bans are taking place.

On one hand, many see this as a step in the right direction for the public at large - removing temptation for younger smokers and certain market segments while taking a potentially dangerous product off the market. On the other, going ‘cold turkey’ is likely to pose a severe challenge for users, with research showing only 4% of individuals who choose to quit with willpower alone remain smoke free after a year.

Thankfully, dedicated treatments available through the NHS that are backed by medical evidence and significant support. Other independent initiatives include initiatives such as Quit With Help< that provide online guidance and support, or national programs such as Voke. These can also be supported by some of the quality apps that can be picked up on the android or apple stores, including EasyQuit, Quitracker and Smoke Free.

Thankfully, there are a range of options available to smokers to help take the place of menthols or replace cigarettes in their routine. These can involve switching to vaping products and we here at Pure E-liquids are fully committed to helping individuals stop, reduce their nicotine intake, or quit entirely. These include a range of devices from hybrid vapes that allow you to use herbal tobacco, along with e-liquids; sleek and effective pod kits that combine an attractive form with high utility; and our entry level e-cigarette line that replicate the look and feel of a cigarette without the worry of tobacco.

We have a selection of menthol flavoured e-liquids to choose from to help with your transition away from smoking - whilst allowing you to embrace the flavours you can come to familiarise yourself with.

Our line of products has a significant range of options for those actively looking to stop smoking. These can help make the transition to going smoke-free easier and more controllable, whether you choose to use nicotine salts, patches or gum. Giving up smoking can be one of the most physically and mentally challenging things you do this year and being kind and giving yourself every advantage possible is only common sense.

What’s Next for Menthol Smokers?

If you are truly struggling with your cravings or are worried about having to do without menthol cigarettes, there are a number of options available to you from cessation, to app support, to switching up your smoking or vaping practice. If you’re still struggling to search out menthol flavoured products, our current line has a range of flavours and strengths from mint, peppermint, green tea menthol, bold leaf menthol, and more. These can be bought as required or easily purchased in bulk, letting you manage the menthol ban however you want, with minimal fuss or stress.

For many, this is a fantastic opportunity to finally quit menthol cigarettes or reduce your use. We are fully committed to supporting our customers in their efforts to stop smoking and you can learn more by contacting our team directly, and do let us know what products you think would be right for your needs.