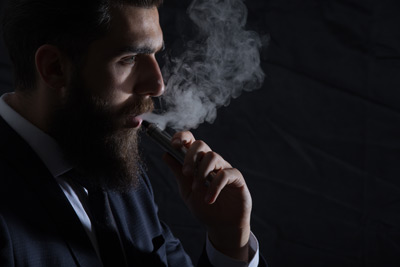 In a time where smoking tobacco has become taboo, and as smokers ditch the cigarettes and switch to e-cigarettes in the hope of leading a healthier life, there, appears to be a quandary when it comes to the etiquette of vaping? Whilst vaping isn’t the same as smoking, a mutual common courtesy can and should be applied, which means you won’t be on the end of any disapproving glances when you decide you’d like to vape. Here is our vaper's guide to etiquette.

Public Spaces
In the UK it is not against the law to vape in public spaces, though in most cases it will be down to the company in question who are operating and running the particular site who will dictate and make their known their policies on the use of e-cigarettes. If in doubt, always check. At the time of writing, MP’s and members from the vaping industry are lobbying for more liberal laws regarding vaping, such as the use of e-cigarettes on NHS premises in an effort to support those looking to stop smoking.

Social Engagements
Whilst vaping e-cigarettes don’t produce noxious smoke like tobacco, it’s important to remember that the act of vaping is still a relatively new pastime that requires a little education amongst the masses. It’s feasible that friends and family may not yet be acquainted with vaping, so whilst in this infancy of understanding it’s important to share the benefits of e-cigarettes, it’s as equally as important to respect those around you. Don’t be blasé and puff away blind to those around you, ask permission and see if anyone would mind.

Cloud Chasing
Depending on your desired choice of e-cigarette device or e-liquid, there is potential to create quite the cloud of vapour. Whilst cloud chasing can be seen as a novelty that in some cases is cultivated by hobbyists to compete in creating vast vaporous clouds, be conscious and considerate of those around you. You wouldn’t necessarily want an alien body to encroach on your personal space, so why invade your fellow human being?

Stealth Vaping
We see you! You may be forgiven for thinking that you can get away with a cheeky puff on your e-cigarette whilst sat at your desk or waiting in the queue of the supermarket. It’s less obvious than smoking and who can detect or see you anyway? Whatever the weather, remember that public spaces will implement their own rules and restrictions that you should adhere to at all times. Be sensible.

Education
Vaping may not be new to you or me, but for many, the sight of someone puffing away on an e-cigarette can seem like a fairly ambiguous one, if not bewildering. Whilst no one likes a preacher, should enquiring minds lend their ears, the opportunity to educate those, especially smokers about the benefits of e-cigarettes should not go amiss. Up to 95% less harmful than smoking tobacco and potentially helpful in the process of quitting smoking, you could be saving lives with a quick conversation about vaping.

Children & Pets
Your e-cigarettes and e-liquid shouldn’t be left around willy-nilly. Shiny, colourful things are appealing to most human beings, but more so to the wanting eyes of little Jemima and Terry her pet rabbit. Keep your devices and accompanying accoutrements out of sight and out of mind to avoid any mishaps.

Sharing Your E-Cigarettes
Your new found enthusiasm for e-cigarettes or a friends desire to see what the fuss is all about, may lead you into the temptation of sharing your device. Don’t! Depending on your device, the mouthpiece attached to your e-cigarette is likely to be used hundreds of times in its lifetime. Keep it clean. Stay hygienic.

At Home
Think it’s okay to vape at home? Go ahead! Vaping in your home should be wholly decided by you and those that may share your habitat with you. If you’ve got friends or family popping over for a cuppa, do the polite thing and abstain prior to their arrival, before seeing if they mind.